An Evening with a Geisha, at Gion Hatanaka Kyoto

Quite a few images come to mind when thinking of 'Things that are quintessentially Japanese'.

And of course, one of the most intriguing and enigmatic parts of Japanese culture: the Geisha.

The mystery surrounding these rarely-seen entertainers has been widely exemplified, from popular books to television and the silver screen, and has captured our imaginations. And the fact that the world of the geisha remains to this day fairly inaccessible - available generally only to well-heeled Japanese or the otherwise well-connected - just makes it all the more fascinating.

Options for foreign tourists to experience something of the geisha traditions are generally limited.

You could of course hang around the famous Kyoto district of Gion, hoping for a sighting of one of these elusive women as they make their way to an engagement. However, given that the city of Kyoto has recently banned the taking of photographs of geisha in certain parts of Gion without permission (following complaints of harassment), this has become a less viable option.

An inexpensive alternative, if you happen to be in Kyoto during the right periods, is to attend a geisha dance show (usually held in spring and autumn). These are stage performance shows by scores of geisha dressed in beautiful kimono, performing a selection of distinct and traditional music and dances.

Or if you are staying in a high-end hotel and have enough cash to splash, you may be able to request your accommodation make a booking for a private experience with a geisha.

For an option somewhere in between these last 2 in terms of cost, there are the one or 2 Kyoto hotels who arrange a small group evening with a Maiko. The most well-known of these is the dinner organised by the Gion Hatanaka ryokan in Kyoto, and this is the choice which we opted for.

And so, one early-evening in April we donned our dress shirts and made our way excitedly to the Gion district and Gion Hatanaka, for their 'Dining with Maiko' experience.

Maiko are apprentice geisha, who spend up to 5 years of their adolescence mastering the geisha arts, before graduating to fully fledged geisha as young women.

On arrival at Gion Hatanaka, we removed our shoes and were shown to a large private room together with the just over a dozen other foreigners who would share this evening's dinner experience with us.

We were each brought our choice of drink, and amiably got to know our fellow visitors.

Not long after, the maiko we would spend our evening with arrived, and we were introduced to her - a genuinely charming and delightful young 15-year old maiko at the start of her journey to become a geisha. This evening she was also accompanied by a jikata - an experienced geisha musician who would play the shamisen while the maiko danced.

Introductions completed, the maiko prepared herself for the evening's entertainment as our food began to arrive.

The cuisine served for dinner at Gion Hatanaka during the Dining with Maiko experience is a traditional multi-dish Japanese kaiseki meal, which unfortunately on this occasion (and unlike pretty much everything else we ate in this amazing country) was subpar, and to our minds clearly aimed at tourists. Compared to the incredible kaiseki meals we were served at the exceptional Gora Hanaougi ryokan, this was one meal which we did not enjoy. 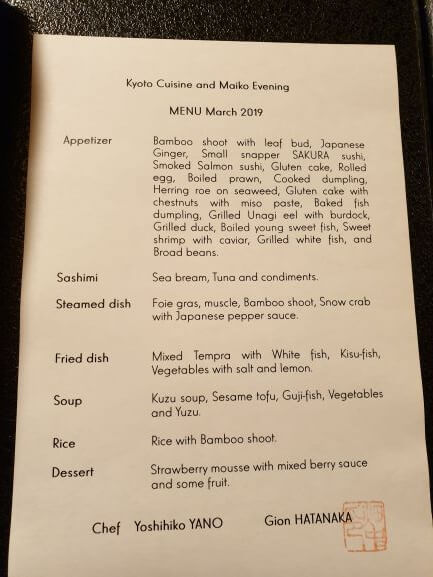 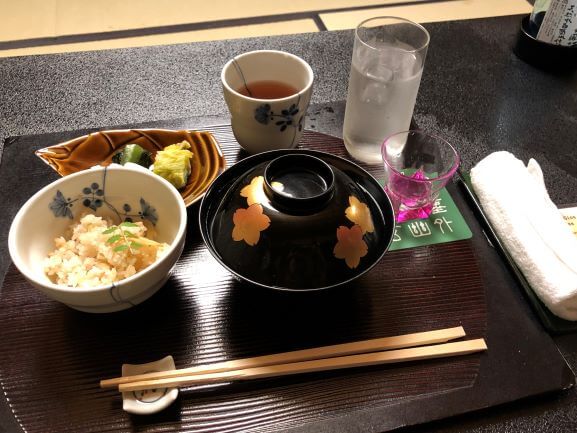 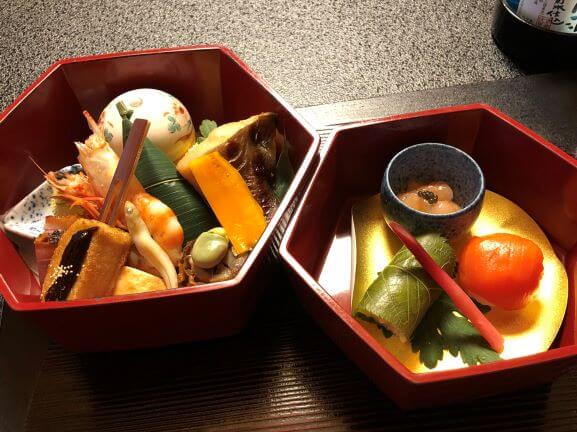 But fortunately that was not what we were there for. And as we ate, our maiko performance began with a few traditional geisha dances - hauntingly, beautifully executed - each movement practiced and considered, as the geisha accompanied her on the shamisen. It is quite unlike any kind of dancing show we had seen before, and was a special and singular experience for us of a classic Japanese tradition. 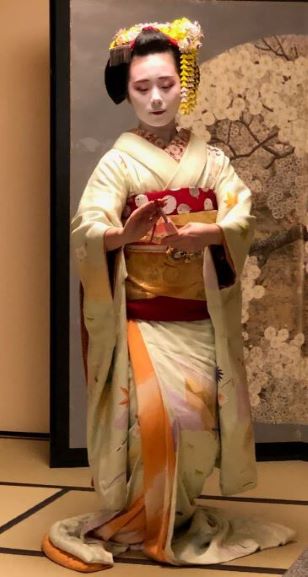 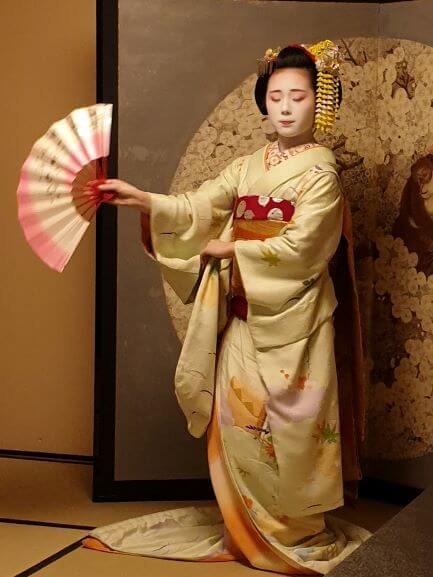 Following the dancing, we were taught 2 different traditional Japanese drinking games by the maiko, and everyone in the audience had an opportunity to have a go at playing one of them - with those who won being given a little prize.

This was great fun, and an unexpected surprise as we had not imagined being able to interact with the maiko that closely. It is also a great opportunity for some photos of the evening while the participants are engrossed and enchanted by the games.

After the games and as we were finishing dinner, the maiko and geisha took the opportunity to make their way around the tables, stopping at each group for some conversation, and the opportunity for us to ask them some questions about themselves and their lives.

We learnt about their reasons for becoming maiko, as well as what that entailed in terms of training - having to play various instruments, memorise scores of dances, and generally master the arts of entertainment and conversation.

We asked about the traditions behind their kimono and make-up, as well as the intricacy of their hairstyles (they have them done once a week; and yes, they do have to sleep with their heads on a takamura - a padded block which does not sound particularly comfortable).

At 15, our maiko was still very young, but her enthusiasm for her craft was plain, her ready smile infectious, and by the end of our talk we were thoroughly beguiled.

As the evening at Hatanaka was winding down, each group of visitors was also given the opportunity to take a photo with the maiko, as a final souvenir of the evening.

Not long after, we pulled our shoes back on and left the ryokan, ready to discover the beautiful Gion district as it is lit up at night.

All in all, the whole geisha dinner experience lasted just over 2 hours, and was a great way for us uninitiated outsiders to catch just a glimpse into the world that these mysterious women inhabit. Amongst a host of amazing Japanese experiences, this is one that stands out for us, and was one of the highlights of our trip to Kyoto! For anyone looking to have a more personal interaction with a young geisha, Gion Hatanaka's dinner with a maiko is one experience we wholeheartedly recommend.