It took us a bit of time to find the Desert Grace Lodge in Namibia. Google Maps' location of it was not much help. Nor, in the end, were the GPS coordinates which I'd looked up on the lodge's own website, but which weren't recognized by our vehicle's navigation system.

Having driven north from Sesriem up the C19 for about an hour, after our earlier visit that day to Sossusvlei, we eventually decided to turn into the Agama River Camp and ask for directions. '2 or 3 kilometres further north on the C19 from here', said the helpful receptionist. 'Look for the sign board saying 'Gondwana''.

From the Gondwana gate itself, it is a further 20 minutes to the Desert Grace, the 10km distance slowly passing as we bumpily navigated the twisting gravel road. But it was no real hardship. As with much of Namibia, the stark surrounding countryside was a beauty in its own right, the distance fuzzily disappearing in the haze of the mid-afternoon heat.

On arrival at the lodge we were greeted with a very welcome cool wet towel and an iced drink. A porter took our luggage to the room, and we were shown around.

To be honest, there is not a huge lot to be shown. Together with reception, in the centre of the lodge is the Desert Grace's restaurant as well as the hotel bar and lounge, and a small boutique selling local arts, crafts and clothing.

To either side, the roughly 2 dozen bungalows stretch out in a long line into the distance in each direction. No room is stuck behind any other - each accommodation has an unencumbered view of the surroundings from its private patio. 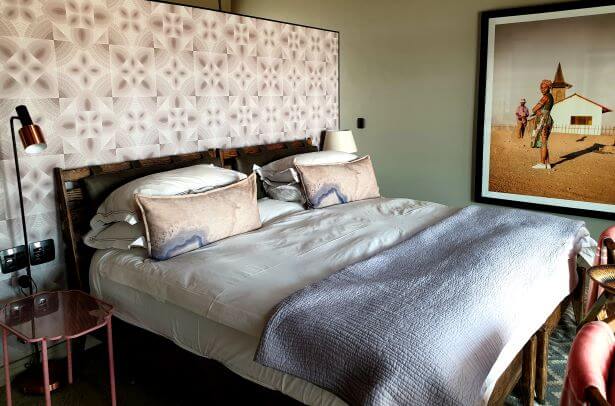 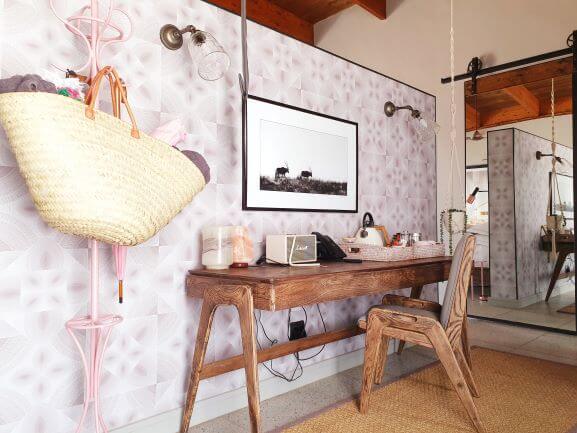 The air conditioning hits us as we enter our room, and it is bliss. It is late-September, and it has been another 37 degree scorcher of a day in this semi-desert.

The Desert Grace, part of Gondwana's luxury 'Premium Collection', is a new lodge, opened in late-2018. And it shows. The decorations are modern and luxurious, in soft pinks and subtle grays, around a king size bed. Tasteful local ornaments are placed here and there. Vivid photographs by a Namibian photographer adorn the walls, depicting local men and women in their environment.

The en-suite bathroom is large, including possibly one of the best shower heads I've had the pleasure of. And for those who would prefer to get a little closer to the Namibian nature, there is also a private outdoor shower available.

Normally in this kind of heat, we would opt to pass the time indoors in the air conditioned shade. Here though, there is another option. Each bungalow has its own splash pool, the water temperature bracingly fresh, and this means we pass the next couple of hours happily outside on the veranda, reading, sipping on cool drinks, and making regular trips into the water to cool ourselves down when the heat becomes oppressive.

The Desert Grace lodge is intelligently placed, the rooms facing a line of long golden dunes, with the Namib Naukluft mountains in the distance.

This landscape is spectacular in its stark aridity - a calming and meditative location. Nothing much moves in the sultry swelter, except perhaps for the odd undaunted fly, and the background shimmer caused by the rising air.

We pass the time in contented contemplation as the colours fade from translucent washed-out blondes to the pinky maroons of sunset.

As darkness descends, the previous stillness begins to be broken by the calls of birds and sounds of other animals as they come to life.

We freshen up, and then make our way to dinner. The restaurant at the Desert Grace is a food stand concept, which works very well given how few other guests are sharing the lodge with us, but which I imagine could become a scrum at peak times.

The first station is a buffet of starters, including various salads, bread, cheese and a soup.

For the main course there are 2 options - a stand to 'make your own pizza' (where in addition to pizza there is some delicious ravioli to be had) - and a barbeque stand where you can choose from a variety of meats, including some exotic local choices. Between us we go for both options, and are uniformly pleased - both the pizza and the meat are superb.

Dessert is a slightly schmaltzy help-yourself ice cream cart, which I find incongruous given the surroundings. Nor is the ice cream itself particularly good.

Nevertheless, overall the dinner is a success, and we make our way back to our bungalow, satisfied and contentedly weary.

The local wildlife joins us for dinner

The next morning, after a night of undisturbed rest, we head back to the restaurant for a leisurely breakfast. The food stand concept is in evidence again - one stand with a selection of cereals and muesli, accompanied by various dried fruits and nuts, the other an option to 'create your own omelette'.

All of it is perfectly on point, and as we sit looking out on the surrounding views of Namibia bathed in the early morning sunlight, it is with our hearts filled with gratitude - for being witness to the beauty of this land and for the opportunity to share it with each other.

Soon after, we pack our car and bid farewell to the Desert Grace lodge, and to what was in hindsight our favourite lodge of this trip, as we continue our Namibian adventure. The sun is sitting higher in the sky and the temperature is already starting to rise, as it has every day of our journey through this vast, sometimes desolate, but always magical country.